On Wednesday, the Italian press erupted with transfer rumour stories following the announcement that José Mourinho would take over from Paulo Fonseca at AS Roma come the end of the season.

The former Manchester United manager was instantly linked with a number of players, with friend and agent Jorge Mendes set to help him out in the upcoming market.

Among the names mentioned was that of David De Gea, currently spending time on the bench as Dean Henderson guards the Old Trafford goal in Ole Gunnar Solskjaer’s team in Premier League games.

The Spaniard enjoyed a great run of form under Mourinho when the Portuguese was in charge of Manchester United, and with the goalkeeper position one that needs a lot of work at AS Roma, the link makes some sense.

Corriere dello Sport pick it up on Thursday, reporting that De Gea is ‘among the favourites’ to bolster the Special One’s squad in Rome.

He is ‘one of the profiles they like’, but it’s made clear Mourinho and co. ‘must first understand if the operation is feasible’. 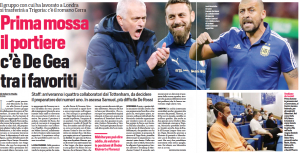 Setting Antonio Mirante free come the end of the season, Roma will also look to find other clubs for both Pau Lopez and Robin Olsen once the latter returns from his loan spell at Everton.

That will leave them with an inexperienced Daniel Fuzato, meaning someone must come in to start between the sticks at the Olimpico di Roma.

This could be De Gea, but it remains to be seen if this is something Manchester United would even remotely consider, such has been the player’s importance over the years, regardless of the odd dip in form here and there.