Home Europe “I’m sure you will be there” – Goalscoring attacker backed to join...
SHARE

Gent’s Jonathan David has been backed to make a big move to Manchester United in the future by former Belgium international Marc Degryse.

The New York born Canada international moved to Europe when the Jupiler Pro League side acquired his services in 2018.

Having managed 14 goals and five assists in all competitions last season, the forward has impressed again this campaign and has 16 goals and 10 assists to his name.

Belgian newspaper Het Laatste Nieuw gave Degryse an opportunity to interview the 20-year-old. During the course of the interview, the former Sheffield Wednesday man gave future advice to David.

“Do not go from Gent to a small club. Rather wait. Something big will come. And that top club will come. I think Manchester United is something for you – I’m sure you will be there in about a year and a half. Believe me,” Degryse explained.

Responding to that, David said: “I believe you.”

Degryse made those comments when he suggested the youngster can have a future in the Premier League. Though David likes the majority of the top flight English clubs, there’s one club excluded from the list.

“I love all teams in the Premier League: Arsenal, Chelsea, Manchester City, but also Southampton, Crystal Palace, Everton … I like nice teams. I’m just not a big fan of Liverpool,” David stressed. 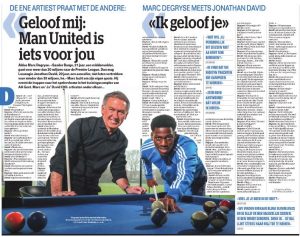 It’s to be noted that Degryse is only suggesting that David can make a switch to Old Trafford in the future and the player is also willing to move.

However, HLN doesn’t mention whether or not Manchester United are interested in the attacker.