If you asked most Everton fans which of all their signings in recent years has been the most successful so far, Lucas Digne’s name might come up a few times.

The left-back, who was purchased from Barcelona for just £19m, has completely replaced Leighton Baines in the role, and is quickly becoming one of the best in his position in the Premier League, if not Europe.

At 26 years of age, the player is about to enter his prime, and is now widely expected to be the go to man for Didier Deschamps ahead of the 2020 Euros.

Le Parisien sat down with Digne on Sunday to have a quick chat about his whole situation at Everton and with the national team, where he was asked in which areas he’s progressed the most since moving to England.

He said: “I had to quickly adapt to the intensity, the physical hits, to the need to quickly play forward and to repeat efforts at a high intensity. I’ve gone up a level. I’m asked to be very offensive, but that means a lot of one on ones in defence because games are very open. It’s the league that suits me best”.

A sign of how loved and respected the Frenchman is at Goodison Park was Marco Silva’s decision to give Digne the armband in three of the past four league games, only losing it against Southampton due to Gylfi Sigurdsson’s return.

On that special moment, he said: “There was a list of four captains. I was the fourth so I knew it could happen even if the chance was slim. I’m proud to wear the armband. I’ve only been here for a season and a half, so it’s a great sign of trust. I’d never worn it apart from with France’s youth levels. It would have been complicated at Paris Saint-Germain, Roma or Barcelona (laughs).”

As for how much he has played since moving to Everton, featuring in every single game this season so far, the 26-year-old has no issues with it. 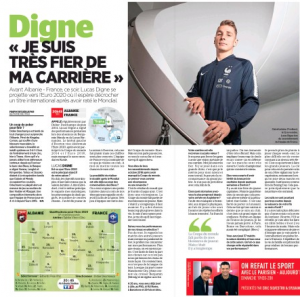 He explained: “I take pleasure every weekend. The most difficult is to stay at the same very high level. That’s what the great players manage to do. The key in all this is to take care of yourself, to be careful when recuperating, especially when you play two games in 48 hours on Boxing Day. That’s mostly to do with food and sleep”.

He has it all planned out, and it seems the future is bright for Digne going forward, whether that is with Everton or somewhere else, as there will undoubtedly be interest in his services from Champions League clubs going forward.

They’ll just need to be very, very, and we cannot emphasise it  enough when we say *very* convincing.