Another international break, another interview from Simon Mignolet with the Belgian press about his future at Liverpool.

It’s becoming a very standard procedure, as the Belgium international readies himself to start for his country against Saudi Arabia on Tuesday, with Thibaut Courtois currently out injured.

Speaking to Het Belang Van Limburg, the 30-year-old was once again asked what it feels like to be demoted to number two at your club, following Jürgen Klopp’s decision to promote Loris Karius to the starting role at Anfield.

He said: “It is never easy if someone tells you you are now number two. At first, you’re disillusioned, then you wants reasons, you look for answers. In football, however, you rarely get a clear answer or one that helps. It’s sometimes difficult to accept, but you must be able to leave it behind and look ahead”. 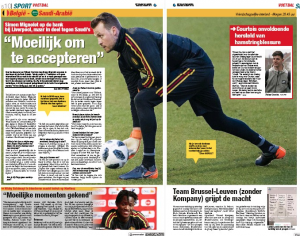 Mignolet revealed he’d had quite a few conversations with the German manager since the decision was taken ‘about all sorts of things’, although he didn’t want to go into detail in the press.

Accepting the fact he’ll only play for Liverpool if something happens to Loris Karius, the goalkeeper explained how he was dealing with this.

He continued: “I’m not used to sitting on the bench, so this is an adjustment, but I do what I’ve always done: train hard. It’s just in my nature to do a lot. You also can’t think about it too much.

“I have to be ready for the moment when the first goalkeeper is suspended or injured. You can also hang your head or make things difficult, but then you are certainly not ready”.

As for what the future holds for him: “I turned 30 in March. You want to play at that age, but I’m still under contract for three years, and now only the upcoming games count. Now, I just concentrate on work. It’s not easy, but I repeat: I just have to be ready for when the chance comes”.

With rumours sending the likes of Alisson and Jan Oblak to Anfield, it seems these could be Mignolet’s final few months at Liverpool, and a summer transfer is just around the corner.

When will he decide? “I’ll think about my future after the World Cup”.