After spending four seasons in the National Women’s Soccer League, Rose Lavelle arrived in England when Manchester City signed her in August 2020.

The midfielder has made 11 appearances in the league and has two more appearances to her name in European competition this season.

Manchester City take on Barcelona in the first leg of the UEFA Women’s Champions League quarterfinals on Wednesday.

Ahead of the clash between the two sides, Catalan newspaper Sport interviewed the US World Cup winner, where she detailed what can be expected from the two-legged European tie.

“I am looking forward to a tie for two highly oriented teams based on possession of the ball,” the midfielder said.

“We will both seek to have a lot of prominence… I know how it is because I have faced several of the Barca players with the Spanish team.”

The 25-year-old stressed the football in Spain has improved in recent years and she anticipates the clash against Barcelona “will be fun to play”. 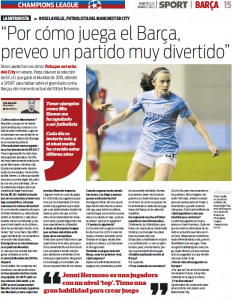 Sport quizzed the Manchester City player over whether she sees herself playing in Europe for ‘many years. Responding to that, Lavelle said: “Why not? I don’t know much where the future will take me. I am more focused on the here and now.”

It was then followed by another question asking Lavelle if she would be open to joining Barca.

She explained: “Who knows! I’m not ruling it out, but right now I’m only thinking about Manchester City.”