Home Championship “I’ll play in League One” – Sunderland player not against staying at...
SHARE

Happy at Sunderland under Sam Allardyce, Wahbi Khazri’s time at the Stadium of Light took a turn for the worst when David Moyes rocked up.

In fact, the whole of Sunderland took a turn for the worse when the former Manchester United manager, currently unemployed, was put in charge of the Black Cats, and a relegation to the Championship ensued.

Barely used by Moyes, and even less so by his successor, Simon Grayson, the Tunisia international decided a loan move was best for his career, and a return to Ligue 1 with Rennes was arranged.

The player told Sud-Ouest how his move came about.

He explained: “Moyes pushed me to one side. He believed I didn’t have the qualities to play in his team… and we were relegated. This season wasn’t any better with the new manager who favoured Championship football with long balls. He played players he knew.” 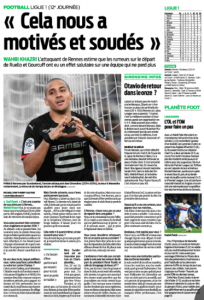 Despite all this, Khazri still has good memories from his time at the club, where he is still under contract until 2020 and where he’ll likely return at the end of the season.

Unfortunately for him and Sunderland as a whole, things aren’t exactly going well this season either, with the Black Cats currently 22nd in the Championship, meaning another relegation could be on the cards even if there is still a long time left to turn things around.

However, that doesn’t seem to bother Khazri.

He said: “It doesn’t matter. I’ll play in League One. For now, I’m not thinking about it because I have enough problems with Rennes. I need to be performing. I follow Sunderland because I belong to the club. I hope they get out of this patch.”

With three goals in six appearances so far for his new side, the 26-year-old has started well with Rennes, and with a game against Bordeaux, his former club, on the horizon, he’s hoping to continue his form after missing the last two games through suspension and injury.