The idea of signing Olivier Giroud from Chelsea is becoming ‘increasingly strong’ for AC Milan, but they are insistent they won’t pay for the Frenchman.

That’s according to Gazzetta Dello Sport, who say as concerns grow around Zlatan Ibrahimovic, Giroud becomes an increasingly likely target.

The newspaper explains that Milan are waiting with ‘bated breath’ to see what happens with Ibrahimovic as there is uncertainty around the recovery time he’ll need for his knee injury.

They’ll know that in about ten days when he undergoes arthroscopy, a type of keyhole surgery, to determine the damage and whether surgery is needed.

That will determine whether Milan need to change their plans for their forward line, and that will revolve heavily around Chelsea’s Giroud.

The ‘candidacy’ for him is ‘increasingly strong’, but the Rossoneri insist that they will not pay any form of compensation for him.

That’s because the striker had ‘made himself available’ on a free transfer not long ago, before Chelsea pulled a rabbit out of the hat and signed him to a one-year extension. 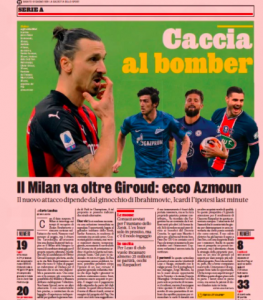 That also threw a spanner in the works, and it seems there will need to be some sort of negotiation between all three parties to make a deal happen in the manner Milan want it to.

Giroud is a strong option for them, though, so expect negotiations between them and Chelsea in the coming weeks, particularly if things turn out badly for Ibrahimovic.