Bernd Leno suffered a knee injury in Arsenal’s 2-0 defeat to Brighton & Hove Albion in June, and that ruled him out for the rest of the season.

Martínez arrived in north London from Argentine side Independiente in 2010, and he has struggled for regular opportunities over the years.

The keeper has two more years left on his contract, and during an interview with Marca’s Argentina edition, he revealed there are several clubs chasing him this summer.

“I am in the sights of 10 teams in Europe. But I cannot say who those clubs are, because it is nothing concrete. I still do not have the clear situation with Arsenal, when I have it on my return, I will make the best decision for my career,” he said.

Marca add Martínez is ‘at his best’ and ‘wants to take advantage’ of this situation. There’s a chance he could be tempted to leave should he feel Leno will automatically be first choice when he returns from injury. 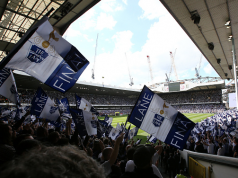