Home Europe “I root for Mourinho, except in this game”: Southampton player ready to...
SHARE

Southampton and Manchester United are preparing to face each other for the sixth fixture of the Premier League at the St. Mary’s stadium tomorrow afternoon.

And as there are a couple of Portuguese stars involved in the game, the Lisbon press wouldn’t let it happen without giving it any attention.

“I root for Mourinho, except in this game”, Soares told Record.
“I hope he has a lot of success, but I’ll defend Southampton with everything I have”. 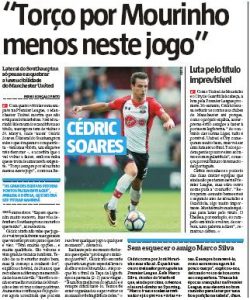 The right-black claims he still doesn’t know which player he will have to mark, but will have a tough job ahead anyway.

“There are many options, and much quality. They are fast and have great technique as well. I have to study them very well, but I already start to know them”.

On Manchester United’s campaign, he said: “They are getting to know Mourinho’s ideas better and it only brings positive things. It raises the confidence and the players now believe they can decide a game at any moment”.

“He’s one of the best in the world and it will always be hard to beat him. We have to be organizated and take advantage of their fragile moments”.

On the Premier League title fight, Cedric didn’t want to make it a two-horse race between the Manchester clubs: “Unlike other leagues, everything is possible. United and City started very well, but it will be a fight until the end. Everyone can drop points and it happens regularly”.

“They’ve strengthen very well and this is Mourinho’s and Guardiola’s second year, which is very important. But there are more teams to fight for the title. Chelsea, for example, are the current champions and will have something to say, for sure”.

Another manager who Soares knows well is Marco Silva. They both worked together during the boss’ spell at Sporting in the 2014/15 season, so he’s another one who the player cheers for.

“Marco is an excellent manager and has proved it many times. It’s always good to see him again, just like happened recently”.

“There are never calm seasons in the Premier League, but he’s in the good path to fight for a good position on the table”.