Towards the very end of the transfer window, Boubacar Kamara was on the receiving end of a few offers.

Both Newcastle United and Wolverhampton Wanderers made loans with a view to buy bids, but the player wasn’t overly keen with the prospect of moving to either Molineux or St James’ Park.

The defender turned midfielder remains a highly sought after prospect, and with his contract currently expiring next summer, there is a chance he could leave for free.

That remains unlikely, such is his affinity for Marseille, his childhood club, and there is a strong chance he would renew before getting a transfer to ensure the Ligue 1 side get some money from his sale.

Whether that’s to Wolves, Newcastle or somewhere else remains to be seen, but one person was absolutely thrilled that Kamara stayed in the south of France was Eric Di Meco, a former Marseille player who won the Champions League with the club in 1993. 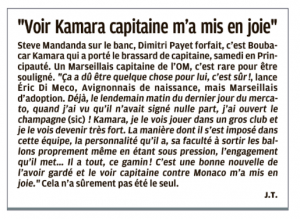 He told La Provence: “The day after transfer deadline day, I saw he hadn’t signed anywhere, I opened the champagne! Kamara, I see him playing in a big club and becoming really good. The way he imposed himself in this team, the personality he has, his ability to come out with the ball cleanly even under pressure, his devotion… He has everything, this kid!”

We’ll have to wait and see what the future brings for Kamara, but it’s clear Di Meco sees Kamara somewhere better than Newcastle and Wolverhampton Wanderers going forward.