Chelsea defender Antonio Rudiger has insisted he had offers to leave the club in the summer and did hold talks with Paris Saint Germain about a move.

The German defender was heavily linked with a move away from Stamford Bridge throughout the summer transfer window, having found himself down the pecking order last season.

It was felt that situation would no improve this season, with the arrival of Thiago Silva meaning there was more competition for places than before.

He was linked with a move to PSG, with it believed their then coach Thomas Tuchel was keen on the move and the French club considered him the type of cheap deal they could afford.

Ultimately a move never happened, and Rudiger has now explained what went on behind the scenes then, and in January.

“It’s no secret that there were talks with PSG,” he told SportBILD.

“The period before the end of the transfer window was simply very short. It went back and forth.

“In the end, it didn’t work out; Chelsea wanted to keep me, and I didn’t want to leave London with every penny.

“We were already at the end of the transfer period, there were only a few days left. My thoughts were: I’ll stay here and fight for my place.

“I certainly thought about it when I wasn’t in the squad. But everybody knows: we are in a pandemic, not all clubs are so liquid at the moment. I wanted to stay here, even though I had offers.

“Shortly after Christmas, I was regularly called up again. For the winter transfer period, there was no question of a move. I wanted to fight my way through.” 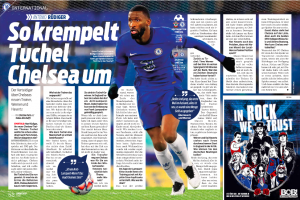 Part of the reason Rudiger was linked with a move away from Chelsea was a supposed falling out with previous manager Frank Lampard.

The perception was that the German was not a part of Lampard’s plans, with the Chelsea legend having settled on others in the heart of his defence.

That was certainly the case in the numbers, with Rudiger managing just 35 appearances in the 84 games Lampard had in charge.

The player, though, insists there was never a problem and if there had been, he wouldn’t have featured before his sacking.

“If I was so anti-Lampard, why would I have been on the pitch under him in his last games?” He added.

“It doesn’t make sense. Frank Lampard is very well respected in the club and by the fans.

“The perception that I was against the coach has more to do with the time around the start of the season when I wasn’t in the squad.”