The 25-year-old, who swapped Atalanta for the Foxes last summer, will play the second cup final of his career. The first final came with the Italian club, which Atalanta lost to Lazio during the 2018/19 season.

When reviewing his debut season in England, the fullback admitted he wants to overcome the disappointment from two seasons ago by beating the Blues at Wembley on Saturday.

“It is indeed a good season. It’s just a shame about my thigh injury, which broke the rhythm a bit. But we are third and play the FA Cup final, the second cup final in my career. It didn’t work out with Atalanta and I still have feelings of revenge,” he said.

“Things have been running smoothly there [at Chelsea] since his [Thomas Tuchel’s] arrival. They play good football. It will be a difficult match anyway, but anything can happen in a final. Moreover, we always play well against the top teams.”

At the King Power Stadium, the Belgium international shares the dressing room with his compatriots, Dennis Praet and Youri Tielemans.

The former AS Monaco man has eight goals and six assists in all competitions and he’s a vital figure in Leicester’s midfield. There have been rumours of interest from top clubs across Europe in signing Tielemans.

When asked who is ‘best player’ at Leicester, Castagne said: “It’s never easy to say. Tielemans is very good. I hope he stays.

“He is still young, but despite his age he already shows so much leadership. You can feel that in midfield. You may not always notice that, but he’s so strong. And if I may mention someone else: James Justin. Unfortunately, he suffered a serious injury a while ago.”

Castagne further explained Praet and Tielemans made it easy for him to settle in his first season with Brendan Rodgers’ side.

“It was of course a bit more difficult to get out, but I was fine with my girlfriend. Things are also going in the better direction here. The shops are reopening and it is a nice city,” he explained. 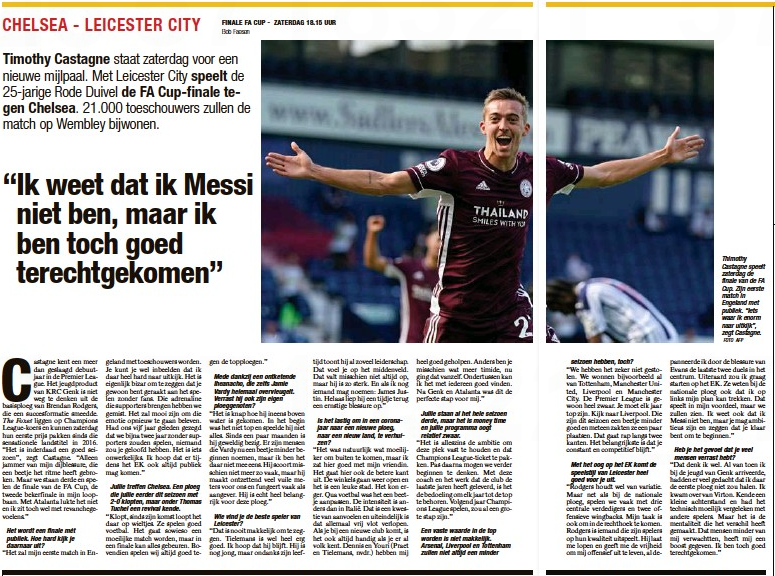 “In terms of football, it took a bit of adjustment. The intensity is different from Italy. That is a matter of feeling and in the end it all went quite smoothly.”

“When you join a new club, it is always useful if you already know people there. Dennis and Youri have helped me a lot. In the meantime, I get along with everyone. After Genk and Atalanta, this was the perfect step for me.”