Hertha Berlin played their final home game of the year this week, and whilst they play again on Saturday, they won’t be back at their own stadium until January 20th.

German newspaper Märkische Allgemeine suggest it could have been Valentino Lazaro’s last match at Hertha’s stadium as a player for the club. It’s stated West Ham claims have been circling, and the player has been asked if it was the last match.

He’s certainly not taken steps to kill the idea of a transfer, and the 22 year old versatile defender is quoted as saying: “I don’t know.” 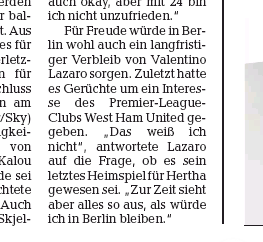 However, when further pressed he added: “At the moment, everything looks like I’m staying in Berlin.”

Märkische Allgemeine believe it will be a big Christmas present for Hertha should the youngster not ending moving to West Ham or elsewhere. The Hammers are the only possible destination named.