Paulinho signed for Barcelona in August 2017 from Guangzhou.

The move encouraged plenty of raised eyebrows, given Barcelona had paid around €40m to bring the player back to Europe from Chinese football.

Guangzhou had paid less than half of that amount when they signed the player from Tottenham in 2015.

Daniel Levy isn’t known for giving out gifts when it comes to Tottenham transfers, so for the player to be sold to Barcelona for so much more than the €14m Spurs got was something of a surprise.

Paulinho did a relatively good job at Barcelona, before going back to the Chinese club in July 2018, initially on a loan deal. Guangzhou then made that permanent, paying the Catalan club roughly the same €40m that they’d received from Barcelona in the first place.

Naturally, a lot of questions were asked about what had actually gone on behind the scenes, and whether the transfers were part of an effort to settle accounts.

On Monday, 21st June, Paulinho was released from his contract in China, and the 32-year-old has since spoken to Mundo Deportivo.

Asked about a return to Barcelona, as a free agent, he said: “Barca is a team that I know well. I spent an unforgettable year there, both at the club and in the city, and we won La Liga and the Copa del Rey. If I had another chance, and it was something good for both me and my family, I would be delighted.” 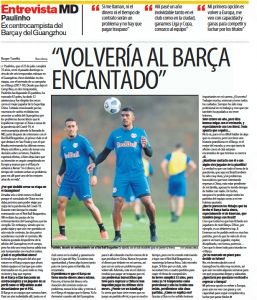 Mundo Deportivo put it to Paulinho that Barcelona don’t have a lot of money right now, and he said: “For me, the issue of money or the duration of the contract wouldn’t be a problem, it never has been, and even less if Barca is the team that calls you.

“I already showed it when I left Guangzhou to go there charging much less than what I received in China. I’ve never put money ahead in my career, so that wouldn’t be a problem going back there. Also, this time the club would not have to pay a transfer for me.”