Thomas Meunier’s contract at Paris Saint-Germain runs down after this season and he was expected to leave the Ligue 1 winners in the last transfer window.

There were several clubs reportedly interested in the right-back in the summer.

In June, we covered claims from Belgium that Everton officials had met with the 28-year-old’s agent for talks and the defender wasn’t against the idea of moving to Goodison Park.

Belgian newspaper Het Laatste Nieuws sat down for an interview with Meunier, in which he publicly talks about why he decided against joining Marco Silva’s side in the summer.

“There was interest and there have been conversations, but it never came to a point where I had to decide: Do I sign or not? Always one of the parties did not agree,” he said.

When quizzed if it was frustrating, he responded: “No, because I have always made it clear that my ambition was to stay with PSG. I did not want to leave to leave.

“Because playing at PSG is special. You are part of a team that can win a European competition, that is not something many players can say. 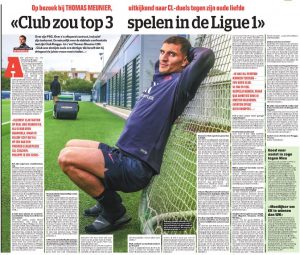 “I could have signed with Everton – a good club. I would have played a lot, that’s for sure, and had a lot of fun too.

Having failed to sign Meunier, Everton ended up signing Djibril Sidibé on a loan deal from AS Monaco. The Frenchman has made only one appearance in the Premier League, but has been started in two EFL Cup matches this season.