On June 1st, we carried a report from DH, who explained that Manchester United are ‘very close’ to signing Thomas Meunier.

The Belgium international’s contract at Paris Saint-Germain runs out in 2020.

Earlier this week, he confirmed the Ligue 1 winners are planning to cash in from his sale in the summer, even though the defender’s desire is to continue at the Parc des Princes.

The 27-year-old has sat down for an interview with French newspaper L’Equipe, and was if he’s waiting for a ‘sign of confidence’ from Thomas Tuchel’s side after expressing his hopes to stay at PSG.

Meunier replied, “The club knows my intentions. I was open to my fourth year here and signing a new contract. It will be their decision; everything is in their hands.”

With the former Club Brugge man’s future uncertain, he’s been on contact with potential new destinations, and one of them is Ole Gunnar Solskjaer’s side.

L’Equipe quote Meunier as saying: “I have contacts (the newspaper say this is with Manchester United and Arsenal), but my intention is to stay at PSG. If this is not possible, we will find a solution.” 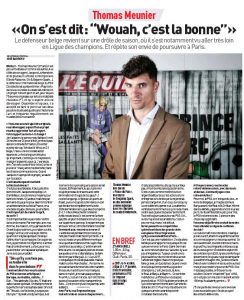 Meunier is a Manchester United, something he’s repeatedly made known.

The 20-time English champions are in the market for a new right-back.  Whether or not that will be Meunier remains to be seen.