Home Premier League Arsenal “All I can say is I supported Arsenal” – 19 goal striker...
SHARE

Crotone forward Simy has revealed how his love for striker Kanu led him to supporting Arsenal as a child.

Simy, for those that don’t know, currently plies his trade for Crotone in Serie A, with his season one of his best to date.

With 19 goals and three assists in 33 games in the league, he is the joint-third top goalscorer in the division, only two goals behind Romelu Lukaku and six behind Cristiano Ronaldo at the top of the charts.

That has naturally led to rumours about a potential move this summer, with Manchester United named as one of his suitors in England this week.

However, it seems there is another Premier League club he would prefer to join, their rivals Arsenal.

“I will try to do better and better because football and life are always evolving. And I am sure that in the end, I will get what I deserve,” he told Gazzetta’s SportWeek Magazine.

“All I can say is that I supported Arsenal because Kanu played there, and I really liked the AC Milan of another African, George Weah.” 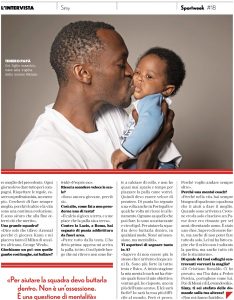 Now, that’s not an open admission he wants a move to Arsenal or anything of that nature, but it’s certainly a big hint.

Whether Arsenal would want the 28-year-old isn’t known, although if Alexandre Lacazette leaves this summer, they will be in need of a new forward.

A 19 goal striker would certainly fit the bill, and given he’s one who loved the club in the past, a deal would presumably be very easy to get done too.