The Italian media love shoehorning Brexit into football stories, even when it doesn’t make sense. That’s the case on Friday with Tuttosport, who go with the headline: ‘Inter, la Brexit e nerazzurra!’

Brexit surely can only be used to mean the exit of something from Great Britain, but Tuttosport turn it into players leaving Inter Milan for the Premier League.

One of the players who could move permanently to England this summer is Andrea Ranocchia. Doing well since signing for Hull City on loan, it would be no surprise if Marco Silva would be keen to keep the player.

A lot will depend on Premier League survival but with Silva looking like he could pull off what looked incredibly unlikely in January, there’s genuine hope. Even if Hull stay up, Tuttosport say they won’t have it all their own way with Ranocchia, because Watford are also interested.

With Walter Mazzarri as manager, it was an obvious link for Tuttosport to make. When Mazzarri was Inter Milan manager, he made Ranocchia captain, so clearly likes the defender a lot. 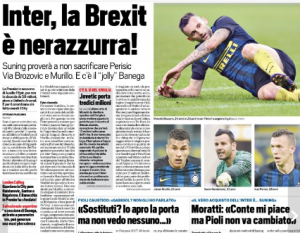 Ranocchia himself may be tempted by teaming up with Mazzari again, and moving closer to foreign-footballer-magnet London. But then Marco Silva seems inspirational to work for, it could be an interesting tussle.

There were claims in Italy on Thursday that Ranocchia could be used as part of a deal to get Virgil van Dijk from Southampton, but staying at Hull or moving to Watford seems likelier.