Earlier this week, there was a story in the Scottish press claiming Portuguese side Sporting would be interested in Hull City left-back Andrew Robertson.

The report claimed the Lions had already made contact with the relegated side in order to land the player, and there was also a competition from Liverpool.

The story has obviously made it to Portugal and was covered widely on Wednesday, but today Portuguese newspaper Record insist it’s not true. 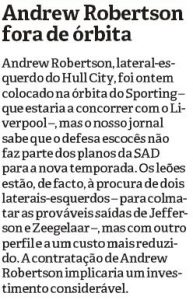 They say Robertson is not part of Sporting’s plans for next season. The club are, indeed, looking for a left-back as two players from the position should be leaving in the summer. But the Hull City player is not a target, especially because he would be too expensive.

This is obviously the word of one newspaper another, but considering Robertson’s price and potential profit profile, he simply doesn’t look like a Sporting target.

If the Liverpool interest is correct, Jurgen Klopp will have clearer run.