Home Europe Hull City ace in European Team of the Week, along with stars...
SHARE 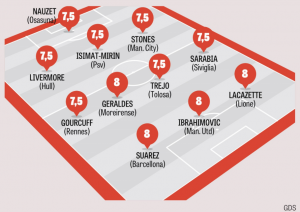 Hull City currently stand on six points in the Premier League, which puts them in third place thanks to goal difference. Also on six points are the Manchester pair of United and City, and Chelsea.

Conceding just 1 goal over games against Premier League Champions Leicester City and Swansea City, Hull have been stronger at the back so far than many expected them to be.

Playing his part is Jake Livermore, who has been named in Gazzetta dello Sport’s European Team of the Week. The grand old Italian newspaper produce a a team of the best performers from around Europe each week, ignoring their own Serie A.

Livermore’s performance for Hull against Swansea, helping his side to a clean sheet, sees him push into the selection with a mark of 7.5, a high grade for Gazzetta.