There’s a chance Hull City could still land 25-year-old forward Renato Santos from Boavista this summer, according to the Portuguese press.

As reported by O Jogo today, the Liga NOS side have no intention of making changes in their squad for the season, but things could change depending on offers.

Hull City are only club named in the story, although there’s also competition from Spain. O Jogo claims they’re only approaches for now, but Boavista will have to look for replacements in case a deal with Hull or a claim from Spain goes through.

Hull City have been linked to Santos for a a few months now. Back in November, even before Portuguese manager Marco Silva took charge of the club, they had already sent 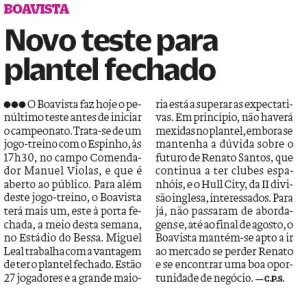 scouts to watch the winger, and were left impressed.

With Santos’ contract expiring next season, Boavista shouldn’t be demanding a huge amount of money, and Portuguese players often see the Championship as a good career opportunity.

But now it’s up to Hull City to make an official approach.

“Man City are one of the teams monitoring him” – Agent confirms interest in midfielder, January move unlikely