Although the Portuguese media have been following Marco Silva’s steps in England closely, there hasn’t been much exclusive news about the manager coming from his home country.

Especially in the past few days, the big newspapers in Portugal have only been echoing what’s out in the English press regarding the manager’s future.

That’s what a headline from A Bola is about today, as Southampton, Watford and West Ham would all be keen on signing the manager for the next season. Even though they don’t give credit, the list of three clubs was revealed by The Telegraph a few days ago.

Southampton, Watford and West Ham interest makes sense, to varying degrees, as does Silva’s potential interest in the jobs. 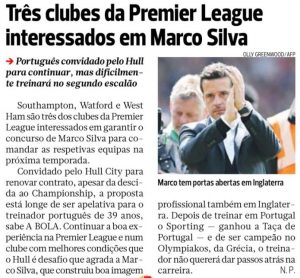 But the short story actually brings some interesting information this time, which is exclusively from A Bola.

They claim that despite relegation, Marco Silva has been offered a new contract at Hull City, The manager, however, considers the offer ‘far from appealing’.

Silva’s wish would be to stay in the Premier League, this time at a club with ‘better conditions’ than Hull City. This is a challenge that pleases him more, since he’s already built a good image in England.

Claude Puel, Slaven Bilic, and Walter Mazzarri may be looking over their collective shoulder.