With Hull City potentially on the verge of being taken over by Acun Ilıcalı, there have been rumours of a few players arriving at MKM Stadium in January.

One of the big names to be mentioned has been Vedat Muriqi, currently struggling to find both game time and the back of the net at Lazio, and Corriere dello Sport push the story once more on Monday.

They explain that the Tigers have ‘moved’ for the Kosovo International, but ‘didn’t close’, most likely because the takeover has yet to be finalised.

Ilıcalı would need to be the owner before this move takes place, and him travelling to watch the 3-2 loss in the FA Cup at the hands of Rafa Benitez’s Everton was a strong sign everything was going in the right direction. 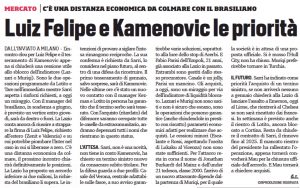 Down the player’s end, the Italian newspaper state Muriqi ‘would prefer to return to Turkey’, where he first made a name for himself at Fenerbahçe, which is what led to his £18m move to Italy in 2020.

We’ll have to wait a bit longer to see if Ilıcalı gets both the club and his star player, but it appears he will need to be convincing if he is to secure the latter.