Just as the English newspapers seem to have finally acknowledged Marco Silva’s fantastic work at Hull City, he’s also getting coverage around Europe.

Most of the European sport newspapers have been writing articles about the Hull City manager, who’s on his way to saving the Tigers from relegation.

Silva has achieved 17 points in 11 Premier League fixtures, and finally got the club out of the relegation zone after a 4-2 win over Middlesbrough on Wednesday.

Only on Friday, we’ve seen Marco Silva on pages in Marca, A Bola and especially Record, who seem to have the most interesting story of the group. 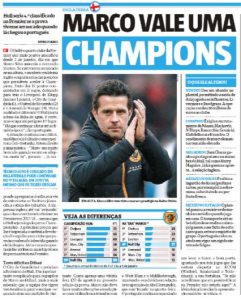 They claim the manager’s success is divided by five different changes he’s made at the club since taking charge.

These topics are the punctual sales, the right signings, the improvement of key players, the veto to bad food and changes in the squad’s pre-match routine.

Record also highlights the fact that Hull would be in the top four if counting since Silva has taken charge, and this is a strong reason why he’s already being linked to Champions League clubs.

Silva is still very much respected in Portugal for doing a great campaign with Estoril, and his departure from Sporting is seen as unfair due to the disagreement with the club’s board. 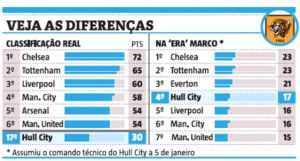 Being called the ‘next Mourinho’ many times, Marco Silva is slowly conquering his place on the European scene, without making much noise and keeping his hard work out of the spotlight, especially in difficult jobs like Estoril and Hull City.

Which, we must say, is quite different to José Mourinho.