Home Europe Hull City keen to get €10m transfer over the line, could face...
SHARE

Towards the end of April, we covered a story in Gazzetta dello Sport regarding the future of Inter Milan’s Andrea Ranocchia, currently on loan at Hull City.

The 29-year-old centre-back has become an integral part of Marco Silva’s plans since the Portuguese manager’s arrival at the KCOM Stadium, and it appears he could stay there a while longer. 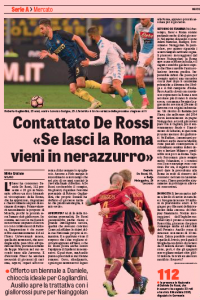 According to the very same Gazzetta dello Sport, the Tigers want to make the deal for the Italian defender permanent, something Inter Milan would be more than happy to do for the right price.

A week or so ago, the Italian newspaper claimed the Serie A club would want around €10-12m for their former captain, and that hasn’t changed.

Wednesday’s edition explains that since Andrea Ranocchia is also interesting other Premier League clubs, Piero Ausilio, Inter Milan’s director of football will not negotiate for less than €10m.

Considering how little Ranocchia played for Inter Milan prior to his loan move to England, this is turning out to be a very good turn of events for the Italian side.

Since arriving at the KCOM, the 21 times capped Italy international has scored two goals and recorded two assists in 13 appearances.