Former Huddersfield Town boss Jan Siewert is set to take charge of Mainz this weekend when they take on Bayern Munich.

That’s according to Kicker, who say the Bundesliga side, who recently sacked Jan-Moritz Lichte and, have turned to the former Terriers boss in their hour of need.

Siewert has been at the club since the summer when he joined as the head of the club’s youth academy, but the ‘tranquillity’ he had been seeking following his unsuccessful spell in charge of Huddersfield is now set to be broken.

He’ll sit on the Mainz bench as a ‘transitional solution’ when they take on Bayern Munich this weekend.

That task is seen just as ‘hopeless’ as his time in charge of Huddersfield was, the German coach having managed just one win in 19 games after replacing David Wagner in August 2019. 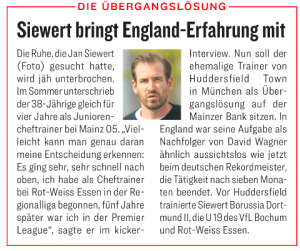 Mainz are currently 17th in the Bundesliga table with just one win from their first thirteen games and two points separating them from bottom-placed Schalke.

Bayern, as you’d expect, sit top of the table with nine wins from their first 13 games, just to highlight the extent of the task Siewert has had thrust upon him.