Home Europe After Huddersfield pull back from signing, despite offering €13m+, player to move...
SHARE

L’Equipe now claims the 24-year-old was waiting for his move to England, which never took shape.

The French newspaper also talks about the Premier League club’s interest in the former Genk man and David Wagner’s side offered to pay more than €13m to secure his signature.

However, the Terriers retracted and decided against making an approach for the Belgium international, who is now set to move elsewhere. Rennes surveyed the player, but it is Nantes who will sign him on a permanent transfer. 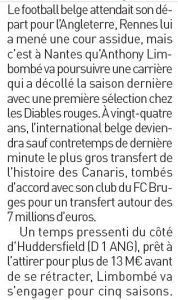 The Ligue 1 outfit have already agreed a €7m fee with the Jupiler Pro League, which is around half of what the English club were ready to pay for Limbombe.

The attacker will be Nantes’ club-record signing and is set to sign a five-year deal with them.