On Wednesday, we covered an article regarding the current situation surrounding Paulo Dybala, who still hasn’t renewed with Juventus and is technically allowed to talk to other clubs about a potential free transfer.

Tottenham, whose director of football is Fabio Paratici, have been linked numerous times, as the Italian was the one who bought him from Palermo in 2015, back when he was still working for the Serie A giants.

Spurs are once again named on Thursday, as Gazzetta dello Sport on Thursday explain what’s recently happened regarding the Argentine.

To keep it short, there was meant to be a meeting between Jorge Antun, the player’s agent, and Juventus this week, but the Italians have postponed it by at least a week, as they want to focus on the three upcoming games against Sampdoria, Villarreal and Salernitana.

While that’s all well and good, the newspaper point out that ‘the more days pass, the more Dybala and Juventus move away from each other’, as the postponement ‘doesn’t help to calm spirits and relationships’.

The Serie A side were the ones to initiate contact with Antun, but the latest move to postpone it some more, while accepted by the agent and the playmaker, has been met with ‘some amazement and with a hint of annoyance’.

It’s been repeated time and time again that Juventus and Dybala had reached a verbal agreement about an €8m + €2m/year new contract back in December, but the Italian club have since gone back on their word, having ‘chosen to take more time, perhaps to better calibrate an offer that will certainly be lower than the previous one, hardly more than €7m’, and for three years instead of four.

This is where other clubs come in, because the 28-year-old ‘is waiting and in the meantime, he will also begin to look around’. 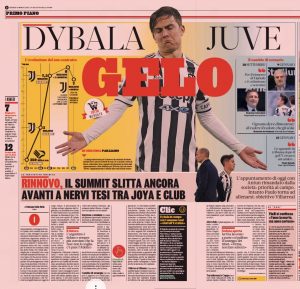 His current situation means he ‘can become an opportunity for many clubs’, with Atlético Madrid used as an example, because both Diego Simeone and their director of football, Andrea Berta, are ‘great admirers’ of the player.

Then come Barcelona and Tottenham, who are said to both be ‘at the window’, while other English clubs could also ‘come forward’.

At this rate, it seems that things are edging in the direction of a transfer for Dybala, meaning Spurs and their competition will be actively monitoring this closely, and both Paratici and Antonio Conte will be hoping they can find the correct arguments to convince the Argentine that moving to Tottenham Hotspur Stadium is the right decision for him.