We won’t bore you with the legal details currently taking place between RB Leipzig and Leeds United these days when it comes to Jean-Kévin Augustin.

We’ve covered them numerous times in the past, and we recently relayed the news from France that, following his exit from Elland Road, return to Germany and subsequent move to Nantes, the striker, who never convinced Marcelo Bielsa, had been thrown in the reserves by new manager Antoine Kombouaré.

The player, alongside two of his teammates, was told to take his stuff out of the first-team locker room and instructed to play with the club’s second team in National 2 until the end of the campaign.

Why that was wasn’t revealed until Thursday, when the manager told L’Equipe.

He said: “I took 10 days to look at the daily work through training, meetings, and even, to finish, a game. To my great regret for Jean-Kévin, he isn’t ready, and he won’t be tomorrow either because he’s so far behind. Because I don’t have time, I decided to put an end to it. After that, is he capable of coming back? That’s another question.

“Today, he’s out of the professional group because I need a tight one, players 100% ready physically and mentally. It’s also a decision I took for him to look at himself. He really needs to understand that he’s in big trouble. Him and his entourage, because it’s also a message  for them: what are you doing for Jean-Kévin to become a football player again?” 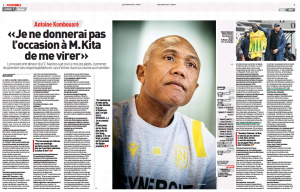 Very harsh words regarding the former Leeds striker, who only managed a grand total of 48 minutes at the Elland Road club during the back end of last season, but perhaps that was the beginning of the end for him.

It seems Marcelo Bielsa may have noticed something similar, which is why we never saw Augustin again after his appearance on the bench in the 1-0 win against Reading on February 22nd 2020.

Either way, if Leeds manage to avoid paying the €21m or so RB Leipzig believe they are owed, they will have dodged a strong bullet, because the last thing they want to do is waste such a big amount of money on a player who isn’t even theirs anymore.