Benfica are about to receive an offer from a ‘great English club’ for the transfer of Darwin Nunez, according to claims from the Portuguese media.

Newspaper Record today writes that the player’s agent, Edgardo Lasalvia, on Thursday had meetings with Premier League sides to discuss a potential transfer.

The outlet claims that according to what they learned, the clubs who’ve shown the strongest interest in the signing are Chelsea, Manchester City and Newcastle United.

Record don’t make it clear who will make this offer for the 22-year-old, presenting Chelsea, Manchester City and Newcastle United as likeliest due to earlier claims, although they do have some information which says this will be an bid that could fit Benfica’s requests.

That’s because the proposal is for Darwin to only move in the summer. Since the Eagles don’t want to lose the player in January, there’s a bigger chance for a deal. 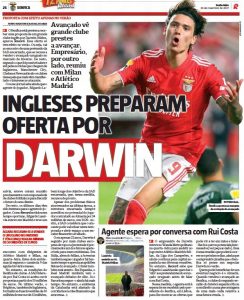 Record had already been reporting this week that the striker’s agent had been speaking to clubs, and today they confirm that there have been meetings with Atletico Madrid and Milan as well.

It’s claimed that Benfica won’t accept negotiating Darwin’s exit for less than €50m, especially because they consider that the player’s value can still grow this season. The newspaper adds that Juventus, Inter Milan, Real Madrid and Barcelona all follow his development. Brighton & Hove Albion were also interested in the summer, but had a €32m offer turned down.

Chelsea, Manchester City and Newcastle United have all been linked this season to the 22-year-old, who caught Europe’s attention after scoring a brace against Barcelona. Although this new bid remains a mystery, it shouldn’t take long until the Portuguese media finds out the club making it.