Barcelona are now getting used to the reality of life after Lionel Messi, and their most pressing concern is being able to register new signings, most notably Memphis Depay, who has already impressed in matches leading up to the start of La Liga.

For this they need to get rid of players, unless there’s a sudden huge income arrival or La Liga bend their rules. That’s seen claims that Barcelona could terminate contracts, with Samuel Umtiti presented as a possibility, and then presumably deal with the legal battles which would follow.

Thursday’s edition of Record has some good news for Barcelona regarding the defender, as it’s stated Benfica are keen on signing the Frenchman. Jan Vertonghen has picked up an injury and that sees a gap in Jorge Jesus’ side.

The Portuguese newspaper believe Barcelona would be prepared to let Umtiti leave for free, which is quite likely, and it’s explained the defender would have to agree to some sort of pay cut even then. 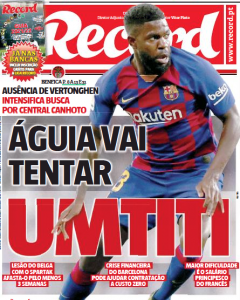 Should he refuse then it will be very difficult for Benfica to complete a deal.

Record don’t mention this but it is possible Barcelona could continue paying a percentage of Umtiti’s wages, if they feel it’s worth that step to get rid of a larger chunk of his income.