Trabzonspor goalkeeper Ugurcan Cakir has spoken to the Turkish press at an event held in Istanbul and discussed his links with Liverpool.

The 23 year old has been in great form for Trabzonspor this season, which has led to reported interest from the Merseyside club in recent months.

Asked about the reported interest from Liverpool, as covered by Turkish newspaper Star, Cakir said these links are giving him confidence: “This situation gives me a lot of confidence but to be honest, I’m not paying too much attention to that. I believe this increased confidence can be seen in my game.

“To be linked with a move to Liverpool is a good thing but I am totally focused on Trabzonspor’s success this season.”

The Turkish international recently signed a new deal with his hometown club which will tie him to the Super Lig side until June 2024.

However, this hasn’t stopped reports Liverpool are interested in signing the Turkey international next summer, with claims earlier in the season the Premier League side could make an offer for him. 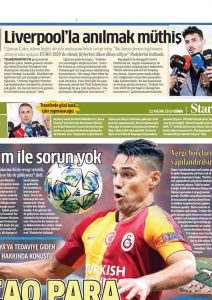 There have been claims in Turkey Liverpool have been sending scouts to get a lowdown on the player, but they should expect to face competition to sign him.

Cakir has made 18 appearances for Trabzonspor in all competitions this season.