Pedro Goncalves moved to Wolves in July 2017 and whilst he didn’t manage to make it with the Premier League club he didn’t have problems settling in away from the pitch.

The 21 year old is now succeeding with Famalicão, another club with a strong connection to Jorge Mendes.

Against all expectations they’re currently top of the Liga NOS, a big achievement for a newly promoted side who still have avoiding relegation as their primary objective.

When Goncalves was at Wolves he lived with Ruben Neves for three months, which means he’s repeatedly asked about the midfielder whenever he speaks to the Portuguese media.

The pair became close friends whilst in English football together, and they recently revealed they’d dedicated a goal celebration to each other. It won’t be happening again, with Goncalves telling O Jogo: “My girlfriend was upset about the close friendship with Ruben (laughs), so I decided to dedicate it to her. I am already forgiven.” 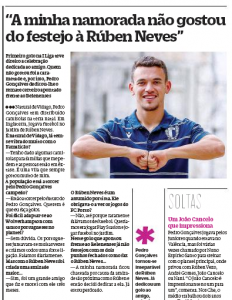 Asked if the settling in process was easy at Wolves, the young footballer explained: “No doubt. The Portuguese often came together and we all created a strong bond. We talk daily.”

Pushing the conversation back to Neves, Goncalves was asked if the former Porto player encouraged him to watch the Portuguese club’s games.

They probably wanted an answer different from the one they ended up with: “No, because we rarely talked about football. We wanted to play PlayStation and play soccer in the garden.”