Unsurprisingly and Understandably, Chelsea are starting to get annoyed with Barcelona.

With the Catalan club close to securing a deal to sign Andreas Christensen as a free agent in the summer, and with the Denmark international said to have already had medical tests to finalise the move, Barca are again looking towards César Azpilicueta.

The Spaniard’s contract expires in the summer, however, Chelsea have an option to extend the player’s deal. For a move to happen, the Blues captain would have to request his club let him go for a low fee, given the service he’s provided over the years, and due to a wish to return to Spain.

That may not be possible, with Wednesday’s edition of Mundo Deportivo reporting the situation is ‘getting complicated’. That’s because Chelsea are ‘not very happy’ with Barcelona over how things have been handled, and the Premier League club could subsequently pull the plug on any possibility of a transfer in the summer. 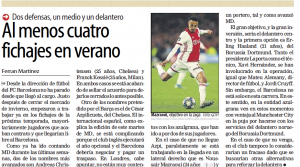 Therefore, Barcelona would be looking at other targets, and Ajax’s Noussair Mazraoui is one of those.

He’s represented by Mino Raiola, and given the agent also counts Erling Haaland among his clients, it’s thought signing the Ajax man could be beneficial for the club’s wider transfer objectives.