Belgian side Genk will make a decision on the future of Celtic loanee Eboue Kouassi this week after initially holding off on doing so.

The 22-year-old has been on loan at Genk since last summer, having found playing time hard to come by under Neill Lennon at Parkhead.

He has not found the playing time he wanted with the move though, having managed just four appearances and 244 minutes of football thus far.

Nonetheless, they have an option to turn his temporary move from Celtic into a permanent deal when his loan deal expires this summer. 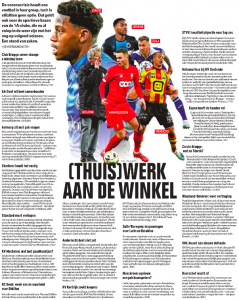 They have yet to make that decision with technical director, Dimitri de Condé, revealing last month that they hadn’t made a final decision but had to so before the end of May.

Het Laatste Nieuws say they are now ready to do so and take ‘the plunge’ on the midfielder this week.

That would suggest they are ready to turn his move from Celtic into a permanent one, despite his lack of minutes at the club this season.

Quite how much the midfielder will cost isn’t made clear, although that is likely to become apparent sooner rather than later if Genk are now pushing ahead with their plans for him.