Home Europe More on Fulham’s offer for player, and where the situation stands now
SHARE

On Saturday we covered a report from O Jogo which stated Fulham have made an €8m offer to sign Andre Almeida from Benfica.

The Portuguese newspaper explained it was a good chance for the 28 year old to get a big contract, having spent his entire career in his own country.

A transfer before the window closes next week wasn’t ruled out, but it was reported Benfica would like some more money and would also have to bring a replacement in, given Almeida is a regular.

Sunday’s edition of the same newspaper reports Fulham sent an official to watch Almeida in action on January 22nd against Porto.

He played at right back as Porto won 3-1. 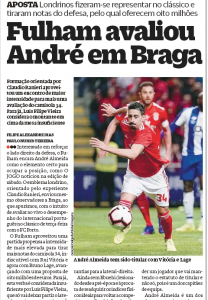 Almeida can play either fullback position or in midfield, but O Jogo say Fulham see him as a right back.

As it stands, Benfica are still holding out for a higher transfer fee.

The Lisbon club’s president Luís Filipe Vieira sees the amount as ‘insufficient’ and there’s also worry whether there’s enough time to bring someone in who would offer the same level as Almeida.