Home Europe Fulham have ‘set their sights’ on forward – Club would ‘listen’ if...
SHARE

Loaned to Bologna for the season from Atalanta, Musa Barrow scored six goals and assisted another seven in 34 Serie A appearances.

The winger, who can also play through the middle, was then bought for a fee nearing £14m, but that doesn’t mean he’ll be staying put this summer, with Fulham reportedly interested.

Managed by Marco Silva, the Cottagers were promoted back to the Premier League, and now they are once again preparing for a tough campaign in England’s elite.

The squad will need to be revamped, which is where Barrow seems to come in, as Gazzetta dello Sport look where The Gambia international could end up. 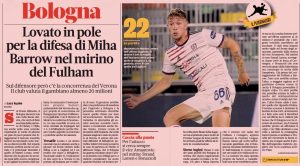 It’s said he is now ‘on Fulham’s radar’, who have ‘set their sights’ on the forward.

While he is not a player Bologna are actively looking to sell, it’s pointed out that ‘if an offer of more than €20m were to arrive from London, it’s likely that the rossoblù executives would listen’.

With Fulham normally rather free spending on their returns to the Premier League, that’s certainly a fee history suggests they can afford, but whether they end up pulling the trigger remains to be seen.