On January 23rd, German newspaper Rheinische Post reported that Fulham have joined Empoli, Stuttgart and Fortuna Dusseldorf in the race to sign Dawid Kownacki from Sampdoria in January.

It was also explained that Fortuna Dusseldorf are keen on landing the striker and he also wants to join them, but the Serie A side want to wait until the end of the transfer window in order to get the best deal.

Today’s edition of Rheinische Post explains how Fortuna Dusseldorf identify targets in the market that fit their limited budget and their way of completing deals quietly in the background.

That no longer seems to be the case for the Poland international as the Cottagers and Stuttgart are still interested in the 21-year-old.

To secure his services, the Premier League club plan to offer much more than Stuttgart or Fortuna Dusseldorf are willing to pay him.

Fortuna sports director Lutz Pfannenstiel is still negotiating to get the deal over the line and Kownacki’s agent has shared his client’s desire is to play for them. 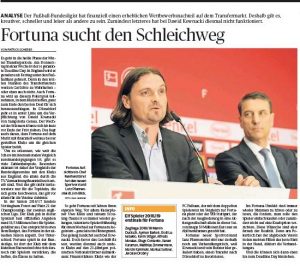 With interest from several clubs, Sampdoria have the advantage of getting the best deal possible from Kownacki’s transfer, if they decide to let him leave in the winter market.