Home Europe Fulham interest in player backed up, and then a clear statement about...
SHARE

This January transfer window has felt like a struggle for Fulham.

They’re linked to endless players and then soon after there’s usually an article published in some European newspaper explaining why the target won’t be signing for Claudio Ranieri this month.

It’s reminiscent of the January 2017 winter market and Fulham’s increasingly chaotic search for a striker.

On Thursday evening we covered claims of Fulham interest in Rafael Toloi, who currently plays for Atalanta.

The Brazilian defender was of so much interest that Fulham were said to have contacted his agent to speak about a transfer before the deadline. 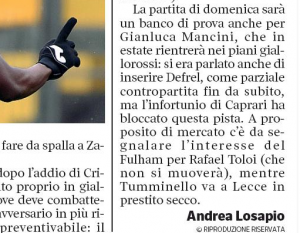 Corriere give that as their own information, without referring to Thursday’s claims from elsewhere. That’s the good news.

The bad news is that soon after the interest is backed up, it’s stated the player ‘will not move’.

No reason is given for it, the newspaper is just rather adamant it’s not happening.