Home Europe Fulham expected to ‘come back in the coming weeks’ for striker –...
SHARE

Fulham are set to revive their interest in Spezia forward M’Bala Nzola after failing to get him in the Janunary transfer window.

That’s according to Gazzetta Dello Sport, who say the Cottagers offered €12m for the forward and ‘will come back’ in the summer.

Nzola has been in good form this season, with nine goals and one assist in 22 games for Spezia in Serie A.

This has earned him ‘great interest’ in England, according to Gazzetta, who say Fulham were particularly keen in the January transfer window.

They put €12m ‘on the table’ for the 24-year-old but were unsuccessful in their attempts as Spezia resisted the offer.

They are now more open to a sale and will start from €15m to sell the striker in the summer transfer window. 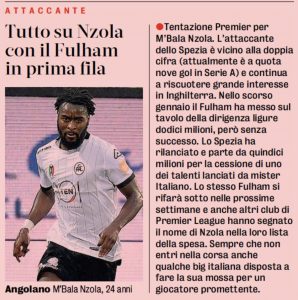 That will see Fulham ‘come back in the coming weeks’, but they are not the only Premier League club to have put Nzola’s name on their ‘shopping list’.

Those other clubs aren’t named specifically, but there is confidence he could end up in England this summer, although that could change if ‘some big Italian club’ is willing to make a move for him.

Until that point, Fulham appear to be at the front of the queue for his signature, although they will have to up their old bid to get a deal done.