Home Premier League Liverpool From Spain: Wolves player has offers on the table, ‘one of them’...
SHARE

Jürgen Klopp has relied on Mohamed Salah, Sadio Mané and Roberto Firmino to lead Liverpool’s attack in the Premier League and the Champions League over the past few years.

Despite having the trio, the Merseyside club are looking to further strengthen the attacking division for next season.

If reports are to believed, the Reds have set their sights on Wolverhampton Wanderers star Adama Traoré.

Journalist Miguel Rico, writing on the back page of today’s edition of Mundo Deportivo, claims the Wolves winger has several ‘offers on the table’. He states ‘one of them’ is from the Premier League leaders.

The Anfield club have been handed encouragement in signing the 24-year-old by Nuno Espírito Santo. The Wanderers manager has admitted he is unsure whether or not the wideman will be at Molineux beyond this season.

Rico is only reporting Liverpool are one of the clubs to make an for Traoré. 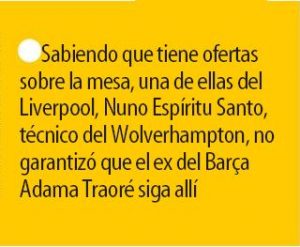 He doesn’t mention if the proposal made by Klopp’s side is to the player or Wolves or both and whether or not their offer has been accepted or rejected.

Traoré has six goals and 12 assists in 42 appearances in all competitions for Wolves this season.