Aaron Ramsey to Everton is building again in the Italian media, with several takes on the possible transfer over the weekend.

Earlier, we covered claims that suggested the Toffees, with their interest being pushed by Rafael Benitez, could pay some sort of fee to Juventus for a January transfer.

The Turin newspaper say Juventus are ready to let Ramsey leave ‘free of charge’ just so they can get his wages off their books and help with their own incoming transfer business.

It’s explained that Ramsey rejected moves to both Wolves and Crystal Palace in the summer market, and then Everton interest showed up in the autumn and has gone from there.

There’s no indication on how Ramsey would feel about a January move to Everton, given his reluctance to return to English football in the last window.

Ramsey has a contract with Juventus which lasts until June 2023, and hasn’t previously 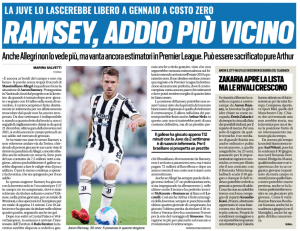 shown a great inclination to want to leave that deal behind. Everton would likely have to pay big wages, and perhaps give the Welshman a deal until 2024 or beyond.

Given the midfield is now 30-years-of-age, turning 31 later this month, and has a record of injuries, it’s one Everton will have to think seriously about.