The atmosphere at Rangers and Celtic for European matches is something well known throughout world football, and something which is repeatedly and widely praised.

With Steven Gerrard’s side set to face Lyon in the Europa League on Thursday evening, it’s given the French media a chance to look forward to the Rangers atmosphere at Ibrox, and relish the chance of observing supporters there.

L’Equipe starts the Rangers praise off by saying: ‘There is not much better than an evening under these stars, even when they are covered by clouds’

For Lyon it’s seen as a great chance to find their level, with Rangers supporters ready to make life as difficult as possible for them as they defend Gerrard’s team.

Le Progres, Lyon’s local newspaper, sound even more excited, saying Ibrox ‘breathes football on a unique level’ and ‘Facing Glasgow Rangers is equivalent to rubbing shoulders with everything that makes the sport so charming’.

Ibrox is described as ‘an open-air museum’, in a good way, and it’s stated Rangers ‘bring the soul of Glasgow to life’. 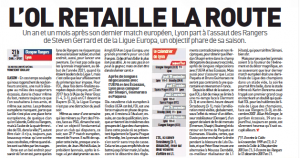 Matches against the club are ‘never a disappointment’, and the utter thrill ahead of the match just sings from Le Progres’ report, with what happens in the stands seemingly just as important as the match on the pitch.

Rangers fans, it’s now over to you… the French media is waiting to be thrilled.