Home Europe From France: Payet won’t be paying bonus back to West Ham, despite...
SHARE

Dimitri Payet leaving West Ham for Marseille is one of the biggest January transfer sagas in memory. An absolute hero among the Upton Park faithful, things didn’t transfer well to the London Stadium, and there were doubts expressed about Payet’s West Ham future before L’Equipe launched the Marseille story.

The French newspaper have been following the situation very closely and Payet has been on their front cover for the past 2 days. It would have probably been the past three days but France winning the handball world cup edged West Ham agreeing a fee off the cover.

Throughout, L’Equipe have clearly had a line of information coming to them about the transfer and Payet’s situation at West Ham. 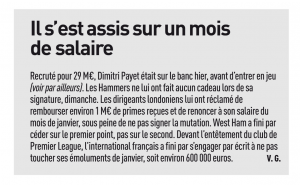 On Wednesday they have a small snippet about West Ham refusing to pay Payet his wages for January, as a condition of a agreeing to let the player leave.

Eventually, with Payet clearly not keen to pay the bonus money back, West Ham relented and, according to the well connected French newspaper, that was that. No wages for January, but no bonuses to pay back.