Finally landing his alleged dream job when he was appointed Manchester United manager at the beginning of last season, José Mourinho has made it clear he’d like to stay there as long as possible.

Of course, while that is his wish, that might not happen as a lot will depend on his results across the various competitions the Red Devils take part in.

Currently doing an adequate job, second in the Premier League and well on their way to qualify for the knockout stages of the Champions League, the Special One, unless there’s a huge argument with his board, looks set for a while.

But what happens when/if it doesn’t work out? Where will he go next?

After all, he’s already managed Chelsea, Real Madrid, Porto, Inter Milan and now Manchester United in four of the top six leagues, leaving only Germany and France as two countries he is yet to take over a club in.

The obvious one here would be Paris Saint-Germain, a club desperately craving a Champions League, a competition the Portuguese manager has won twice. 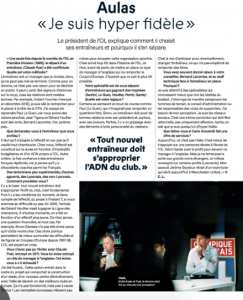 However, the Ligue 1 leaders aren’t the only ones dreaming of one day appointing Mourinho, as Jean-Michel Aulas revealed in an interview with France Football.

Asked whether or not he would consider Carlo Ancelotti to take over from Bruno Génésio were the Italian to offer his services, he said: “Today, that isn’t one of our ideas. It’s better to lean on someone who grew up at Lyon. Rémi Garde had that profile to become an ‘English manager’.

“However, I’m not closing the door to great European managers. I asked about a few people (Léonardo). My associate, Jérôme Seydoux, dreamt of a man currently working at Manchester United.”

Judging by Mourinho’s last few jobs, Lyon have a long way to go before getting Seydoux’s dream man, especially when it comes to paying his wages, but who knows?

Stranger things have happened in football, after all.