Home Premier League Arsenal From France: Lemar and Lacazette are big friends, and that could help...
SHARE

Arsenal are being insistent over Thomas Lemar. Not overly insistent, not obsessive with their efforts, but they’re hanging around the AS Monaco player and not going away.

Friday’s edition of L’Equipe covers Arsenal’s latest offer. It’s €45m, a rise from €40m so not so dramatic, and Arsene Wenger must have known it was likely to be knocked back.

Perhaps this is a longer game for Wenger, transfer by a thousand cuts, and rather than go in all guns blazing to Casino Square, he’s playing a softer approach.

Wenger is said to be convinced that Lemar could combine well with Lacazette, and 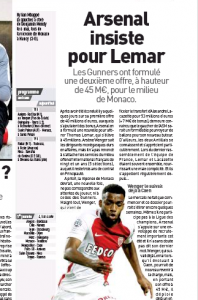 L’Equipe say the two men get on very well. At the last gathering of the France squad the pair looked to have a ‘real bond’ and be building a lasting friendship.

As the French newspaper point out, ‘The transfer window has only just begun’ and there’s still plenty of time left for Arsenal to do a deal for the wide player.

The 21 year old is said to also be interesting Manchester United, Tottenham Hotspur, and Atletico Madrid.