Josh Maja left Sunderland in the winter transfer window for a fee reported in France to be worth around €4m.

That headline figure is if the 20 year old hits all the bonus targets he needs to at Bordeaux, and Sunderland are thought to be due 10% of a future transfer fee which could be significant if he develops as the French club hope he will.

But what’s in it for the player?

Well, he was hardly going to leave the League One club unless it was beneficial for him in both a sporting and financial sense. Sunderland may be not be in one of their greatest spells, but they’re still a big club to play for and Maja was getting games.

Friday’s edition of L’Equipe has the newspaper’s annual report on salaries in Ligue 1, and for Maja it’s stated he’s earning €65k per month before bonuses. These figures are often questioned, but that tends to be the headline ones rather than for younger players. 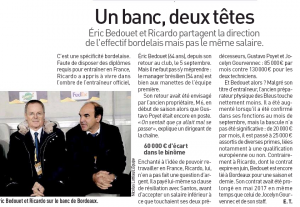 It’s suggested Bordeaux may have had to pay such a figure given the competition West Ham and Celtic put up to get the player from Sunderland.

Yacine Adli, an 18 year old recruited from PSG in the winter market, is being paid €80k a month, according to the report.