Before Manchester United’s current woes worsened further on Saturday, French newspaper L’Equipe had published an article about the spat between Jose Mourinho and Paul Pogba.

It feels like they post several articles a week about the situation, but they’ve been very much treading carefully.

Whereas they had good information when Pogba was moving to Old Trafford, and have interviewed the footballer many times, they’re clearly not being given the midfielder’s side to leak.

That’s not to say they’re failing to back their man up, and it’s clear who they feel is stirring the pot.

L’Equipe say that on Friday in his press conference, Mourinho played one of the roles he knows best… ‘that of an outraged pyromaniac’. Pointing fingers at everyone for exaggerating the situation and lashing out rather than actually dealing with the issue at hand.

And that’s when the French newspaper really states what they think. It’s claimed Mourinho ‘seems to have orchestrated’ Sky being able to film and broadcast his spat with Pogba.

L’Equipe state it also wasn’t Pogba’s side of the argument who leaked the story about the vice captaincy being removed, as the manager looks to win the ‘battle of opinion’ at Manchester United. 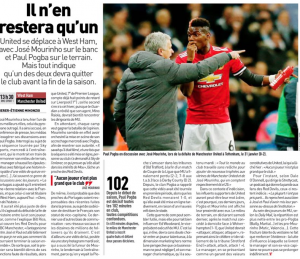 Sunday’s edition of the same newspaper covers rumours of Zinedine Zidane potentially taking over from Mourinho, but, again, from the French side there’s no information being leaked.

If Zidane has held talks with the Premier League club, or knows anything about interest, then he’s not leaked that to sources L’Equipe would have.