Alassane Plea is continuing his progression at Lille, and continuing to catch the eye of would be purchasers.

Tuesday’s edition of L’Equipe has a club by club run down of salaries in Ligue 1, and Plea is said to be earning €150k per month before tax.

The attacker has almost quadrupled his salary in recent years, and a sale in the next summer window is a real possibility.

Linked with West Ham previously, around a year ago Plea was said to be interesting Southampton. At the time the Saints were managed by Claude Puel, and he’s kept his interest up despite leaving Southampton in the summer.

L’Equipe say Puel continues to watch Plea closely, but there’s no claim of any Leicester City approaches yet being made or a bid being formulated. 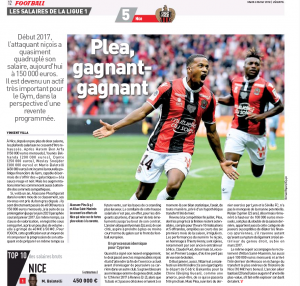 Leicester would likely face competition should they move for the Nice player in the summer, but that may be from clubs other than Southampton if the interest last year was Puel specific.

Plea has 10 goals and 4 assists so far this season, he can play as a striker or on the right.