N’Golo Kanté to Paris Saint-Germain, as unlikely as it sounds, continues to be a thing in France, as the Ligue 1 champions want the France international to be their permanent Thiago Motta replacement.

Estimated to cost any club upwards of €90m, the former Leicester City star doesn’t appear to be particularly pushing for a move, even if France Football this week believe the player’s entourage are trying to convince him to return to France.

In fact, the magazine claim the French club’s offer and the contract for the midfielder are both ready to be offered, but nothing will take place until the end of the World Cup, or Kanté’s country’s run in it.

Furthermore, the Blues are said to already be looking at potential replacements should Paris Saint-Germain’s offer prove too convincing, with three names listed. 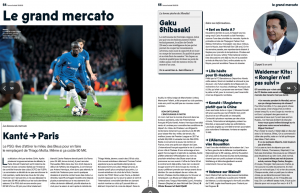 The first is Tanguy Ndombélé, who has attracted a lot of Premier League attention after a great first season at Lyon on loan from Amiens.

Second is Napoli’s Amadou Diawara, but it’s difficult to imagine the Serie A side letting their starlet leave.

However, Maurizio Sarri taking over at Stamford Bridge could prove key.

The final name is one Chelsea fans will know well in Jean-Michael Seri, even if his profile isn’t quite the same as Kanté’s.

The OGC Nice midfielder is probably the easiest to acquire, with a release clause in his contract worth €40m valid until July 15th.

France Football state the Blues have been in contact with all these players, but it doesn’t mean much until Kanté leaves the club, which seems highly unlikely.